We thought we’d try and answer these and other questions in this article.

Here in the UK, we follow the same rules as the EU. However, now we have left the EU, those rules could change at some point in the future. Currently, in November 2020, we’re still in alignment. So what are the laws for riding an ebike at the moment?

Why might I need a license to ride an ebike?

You don’t need a license to ride an ebike in the UK or the EU. The ebike must be legal, and that means it has to conform to the regulations we discuss in the next section.

If you have an e bike which doesn’t match these specifications, then you will need to register it with the DVLA. See below for more information.

What are the laws and regulations for riding an electric bike in the UK?

The rules for riding an ebike in the UK and Europe are these: the bike must have a motor with a maximum power of 250Wh, it must be pedal-assist only — a throttle is only allowed for speeds up to a walking pace. The motor must stop assisting when you get over 15.5mph (that’s 25 km/h). You can pedal your bike as fast as you like under your own steam, of course.

Also, you must be 14 or older. Helmets are recommended but not mandatory, and you can ride them anywhere a non-assisted bicycle is allowed.

What are the ebike laws in Northern Ireland?

Northern Ireland has, this year, come into line with the rest of the UK and EU. Previously their rules were different and required registration and a full motorcycle helmet. Happily, now the rules are the same, and you can ride your electric bike anywhere in the UK with confidence that you’re not breaking any laws.

Who regulates the laws and sets the ebike rules in the UK?

The government decides what the laws are. They, naturally, have a special acronym for an electric bike — EAPC — that nobody else uses. It keeps them happy. Anyway, this term stands for “Electrically Assisted Pedal Cycle”. You can see their guidance page here: https://www.gov.uk/electric-bike-rules

EAPC joins the other UK road vehicle classifications, which are:

How can I check and prove that I can ride my ebike without a license in the UK?

Your bike should have a plate or sticker that shows the legally required information, which is: the power output or the manufacturer of the motor and either the battery voltage or the maximum speed of the bike. It should look something like this: 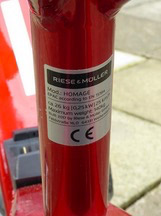 What should I do if I want to ride a more powerful electric bike?

In many EU countries, there is a special class of ebike known as a “Speed Pedelec”. These are designed to give assistance at up to 45kph, which is about 28mph. These have to conform to strict regulations and need to be registered with the DVLA. This applies to any electric bike that doesn’t meet the EAPC designation.

All e-bikes that do not meet the current EAPC regulations, as well as some “Twist and Go” cycles are subject to type approval. They are treated in the same way as mopeds, so as well as type approval the bike will need to be taxed, insured, and have an MOT. The rider must also have the appropriate licence and/or training and wear a helmet which meets the relevant safety regulations, amongst other things. And you’ll have to display a number plate.

It’s not simple and there is much discussion about whether changing the law to allow ebikes to give assistance to 20mph would stop people illegally changing their bikes to travel faster.

If you want to go through the registration process, there is an excellent article to read here:

What class do “twist and go” throttle ebikes belong to?

It could be complicated. Here we go: since January 1, 2016, the only throttles legal within the EAPC legislation are those that assist the rider without pedalling up to a maximum speed of 6 km/h (3.7 mph) – i.e. starting or walking assistance only. If the rider is rolling – but not pedalling – faster than 6km/h, the throttle must cut off. If the cyclist is pedalling at the same time, then the throttle can still assist up to 15.5mph (25kph).

If you bought an ebike with a full-speed throttle before January 1, 2016, don’t panic: those sold prior to this date are still considered as EAPC and so are still legal.

Can I ride an electric bike with my car driver’s license in England?

You don’t need a driving license to ride an ebike, as long as it falls under the EAPC rules described above.

Do I have to pay for riding an ebike on the road?

No, of course not. There is no VED (Vehicle Excise Duty) on electric bikes that conform to UK laws.

What are the penalties for riding an ebike without a license in the UK?

As you don’t need a license to ride an ebike this doesn’t apply. But if you ride an illegal ebike which falls outside the EAPC rules, you’re liable to be prosecuted for riding without insurance, with no licence, and even for exceeding the speed limit! You could get points on your licence and/or a fine.

What are the laws and rules for riding an ebike in the EU?

Currently, the same laws and rules apply, as we fell in line with EU law EN15194 in 2015. Different countries have different laws applying to speed pedelecs, however, and that usually means they recognise them as different to mopeds, unlike the UK at the moment. Also, in most EU countries, kids under 14 are allowed to ride ebikes legally.

If you’ve made it through all that, I hope the legal aspects of riding an ebike in the UK are clearer. As with many legal matters, it’s not simple, but for electric bikes that conform to UK and EU rules and regulations, which we at Velospeed sell, there’s not really anything to worry about.

If you’re determined to use an ebike that is more powerful, and/or assists you faster than the current legal limit, then you must register it with the DVLA, as described above. If you don’t, then you risk points on your licence, fines, and maybe your bike being confiscated. This may well be unlikely, but we can’t condone it!

Love what you read?

We stock a vast range of electric bikes.

Why not have a look?

Need help choosing the right electric bike for your needs?

Pop into our showroom and we can help find exactly the right ebike for you!